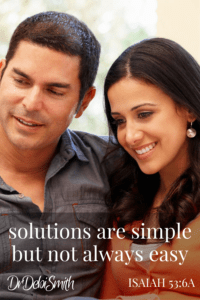 The Negative Cycle reminds me of a poster my dentist has on the ceiling at his office. He put it there so his patients would have something to look at while they’re in the chair. I think about it sometimes because it reminds me of myself. It’s a picture of a tiny kitten looking up helplessly from the bottom of large cardboard box.

Maybe you can identify? Isaiah put it this way: 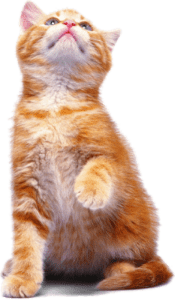 Kittens, sheep, people. Sometimes there’s not much difference. No one plans to get himself or herself into a pickle (Sorry. I like to mix metaphors), yet we all do at one time or another.

Many couples start backing themselves into The Box early in their relationship. Something happens and one of them feels disappointed or hurt. Maybe it’s the woman. (Sometimes it’s the man.) If she says something to her partner about it, he might minimize her feelings or get defensive about his actions or intentions. He means well, but it doesn’t help her feel better.

At first, it seems like a simple thing. Each tries to forget what happened, to move beyond it because it feels so childish to them both. However, the outcome of those early hurts starts a cycle of negative interactions that will continue to grow and solidify over time. Before long, they’re trapped in The Box.

Life in The Box: Trapped in a Negative Cycle

In The Box, he believes that she is overly sensitive and avoids sharing his own thoughts and feelings with her. She believes that her feelings don’t matter to him, and she withdraws, too. It’s lonely. Being in The Box together.

Getting out of The Box is simple, but it isn’t easy. The Good Shepherd is there to help. Just ask. He may suggest you find a local “shepherd” to walk with you through the process. If He does, let me know. I’m here to help you get out of The Box.

Learn the step-by-step process here > How to Resolve Couple Conflict.

In the meantime, I’ll be praying for you both!

Most women pray for their men, of course. But what is the content of your prayers?

If you want to pray effectively for your man, you’ll need to get into the cave with him.

For example, don’t insist he talk about his feelings. Because he may not fully understand them yet himself.

Instead, Learn to Pray Differently

The first steps are simple.

That alone will give him more space to talk – when he’s ready. And you’ll learn the most you can about him. He may not say much. But listen to his words. And pay attention to his actions. His actions will speak loudest.

Because you’re not a man, you’ll need a spirit of wisdom and revelation (Ephesians 1:17) that will enable you to pray for him in accordance with God’s will and perspective on the situation. Yes, you may have some great ideas, but this may not be the best time to share them with your man. Wait upon the Lord, trusting that He cares a lot more about what’s going on with your man than you do.

Keep the content of your prayers between you and the Lord. Your man’s vulnerability is not a subject you should be sharing with your mother, your sister, or your girlfriends.

I keep asking that the God of our Lord Jesus Christ, the glorious Father, may give you the Spirit of wisdom and revelation, so that you may know Him better. (Ephesians 1:17)

He who finds a wife finds what is good
and receives favor from the Lord. (Proverbs 18:22)

An understanding of men necessarily includes a healthy respect for the Man Cave. But as women we typically have a really hard time with it. We have nothing to compare it to, so it simply doesn’t make sense to us. But it makes a lot of sense to men.

That’s why I love to listen to men – especially older men. Because they always have something of value to say. And since I’ve never been a man, it really helps to listen carefully – if I want to learn, that is.

Your man doesn’t tell you what he needs from you when he’s struggling with something because:

Correct Answer: c) all of the above

When women are worried about something, we usually want someone to walk and to talk though it with us. For the most part, our American culture has trained us to do just that.

However, that same culture taught him to do the opposite! Remember the story of what happens to the toddler boy on the playground? His early experiences were the beginning of his education in The Boy Code. He learned that a man has to appear tough – a Sturdy Oak – in order to be loved and respected. And he learned that a man must figure out his own problems and deal with any vulnerable emotions – anger, sadness, fear, hurt, grief, shame, guilt, and doubt – on his own.

So that’s what he does. Automatically.
And he does it in the Man Cave.

But being shut out makes a woman more anxious … worried about him … and about herself. It feels like the Beginning of the End to her, and she doesn’t understand why.

So she tries to fix it. But first she has to get through the wall. Drastic times call for drastic measures. So she hauls out the Wrecking Ball. I mean, after all, doesn’t the Bible say it’s not good for the man to be alone?

[callout]“So what do I do? I suppose you expect me to sit down on the curb outside the Man Cave and just wait for him to come out?” you ask in your frustration. “If I do that,” you reason, “he’ll never come out!”[/callout]

Nope. There’s so much more you can do to help him! Yes, you’re right about it not being good for him to be alone. But how you choose to partner with him in times like these will make all the difference in the world for you both!

There is One More – Even More Important Thing you can do.
But I’ll save that for tomorrow’s post!

The Lord … makes me lie down in green pastures,
He leads me beside quiet waters,
He refreshes my soul.
He guides me along the right paths
for his name’s sake. (Psalm 23-1-3)