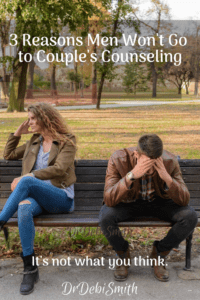 Do you wish you were in couple’s counseling, but your husband won’t go? You’re not alone. In fact, many women spend several years urging their husbands to get help, either as a couple or as an individual.

They chalk it up to stubbornness, an unwillingness to admit he is wrong, or complaints that it takes too much time/costs too much. However, men actually have very good reasons to avoid the counseling office.

Here are the first three that come to mind:

Men learn the Rules of Masculinity as boys. By the time they enter kindergarten, they have already learned the Rules at a deep emotional level.  The Rules are essential to their identity as a member of the male gender. To break the Rules means certain shame: his vulnerability exposed in front of his peers.

2. Fear. Going to couple’s counseling is volunteering for an emotional suicide mission.

Being open and vulnerable, yet able to handle the onslaught of emotions that brings, is a major goal of psychotherapy. And most therapists (male and female alike) totally ignore the fact that men are far more sensitive from birth than are women. They don’t acknowledge that he has his defenses up for very good reason and, instead, try to get through that wall at any cost. Usually by attacking, blaming, and criticism. Sometimes it’s subtle. Other times, not-so-subtle.

Sadly, too many counselors choose sides. They’re not thinking about the man’s needs, only the fact that he’s disengaged. So the cycle continues and intensifies during the session. I’ve heard so many stories about counselors who just sit there while the wife attacks her husband, then they recap what she’s upset about. That type of intervention perpetuates his Male Relational Dread and makes him want to run … or least not return for another session.

Even the kindest, most well-intentioned, most well-trained counselor can miss this.

So what can you do about it?

You have far more power than you realize. Schedule an appointment for yourself and invite him to join you. In other words, tell him you want to work on yourself and let him know you’d like his input in the safety of the counseling office.

No, you are not responsible for what he does.
Those are his choices to make.

However, you do have the responsibility to learn how what you say and do influence his choices. In fact, you were created to influence him. And he is designed (physically, emotionally, spiritually) to be influenced by you. Not controlled. Influenced.