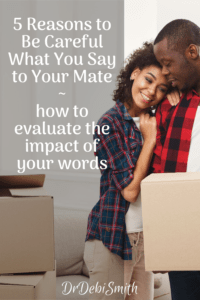 Honest couple communication – especially between husband & wife – is essential for creating connection and lasting joy. But should you be able to say whatever you want to your mate?

I’ve always tried to be careful what I say to My Beloved. But many folks – mostly women, it seems; but some men, too – believe you should be able to say whatever you want to your mate. They call it “just being honest.”

On the other hand, some are too careful about what they say because they’re trying to get a particular response from their partner. Actually, that’s manipulation, and I’ve never seen it work to create true connection in any relationship.

The Psychology of Better Couple Communication

As a Couples Psychologist, I’ve seen both extremes.

let it all out vs. tiptoeing around

And the sad thing about those who’d like better couple communication is that most don’t even realize what they’re actually doing! So here are my 5 Reasons for being careful what you say:

Here are a few words from the Word about words.

I will proclaim the name of the Lord.
Oh, praise the greatness of our God! (Deuteronomy 32:3)

As the rain and the snow
come down from heaven,
and do not return to it
without watering the earth
and making it bud and flourish,
so that it yields seed for the sower and bread for the eater,
so is my word that goes out from my mouth:
It will not return to me empty,
but will accomplish what I desire
and achieve the purpose for which I sent it. (Isaiah 55:10-11)

Then the angel said to me, “Write this: Blessed are those who are invited to the wedding supper of the Lamb!” And he added, “These are the true words of God.” (Revelation 19:9)

1 thought on “5 Reasons to Be Careful What You Say”